Takimoto along with Ninja ninja is one of the two guardians of the world and his role is to serve as the guard of the holder of the number one headband, just like Ninja ninja he is apparently ageless and immortal.

He looks like a short African American and wears ninja clothing but is less skilled in the arts of battle than Ninja ninja even though he is still powerful. He battles with a short sword and uses a special type of cutting string to trap and destroy his opponents, he is also pretty sarcastic and loyal to his work, even if he is the guardian of the number one headband holder he seems to not know Ninja ninja who shares the same purpose, even though Ninja ninja is referred as a higher being than him, which leads to the speculation that there might be a hierarchy between the spirit world of the guardians.

Takimoto telling Afro about his purpose in the world. 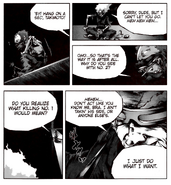 Ninja ninja beats Takimoto, and is hinted he might be a greater being.

Ninja ninja mocking Afro while he is crowning him.

Ninja ninja telling Afro to better do a good work as the new world ruler.

Takimoto and Ninja ninja showing their support to Afro.
Community content is available under CC-BY-SA unless otherwise noted.
Advertisement