Smoking is a practice in which a substance, most commonly tobacco is burned and the smoke is tasted or inhaled. Many characters throughout the show are seen to smoke cigarettes, however Afro is clearly smoking weed, we can tell this by the shape/ construction of his smokes. The first time a cigarette was seen was in Episode One. Justice was seen smoking a cigarette as he first appeared. Later on as Afro grows up he is also seen smoking a cigarette. This could be due to the popularity of the cigarette in the diverse world of Afro Samurai or the fact that Afro is often depressed. Afro possibly also smoke's marijuana as seen when Ninja Ninja attempts to smoke Afro's joint but chokes. Though its also possible Afro smoke's a much stronger brand than most, supposedly stronger than menthol as Ninja Ninja suggested Afro retire and switch to menthol in Resurrection. Afro smoke's a joint style cigarette, Justice smoke's a cigar style wrapped in blunt wraps, and Ninja Ninja smoke's a very long straight but thin cigarette.

Afro smoking in a video game 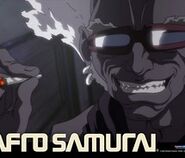 A toy Afro with a cigarette 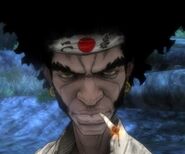 A close up of Afro smoking

A close up of Ninja Ninja smoking
Community content is available under CC-BY-SA unless otherwise noted.
Advertisement