Edit
watch 01:36
We're Getting Mutants in the MCU - The Loop
Do you like this video?
Play Sound

As swordsman attack one another they often use swords. Since swords are obviously sharp and samurais (swordsman) fight using them they slice through their opponents making the decapitated. The first time this was seen on the show was when Afro's father, Rokutaro was killed by Justice.

In the Ninja Ninja card game featured on the video game Afro will decapitate specific body parts of his opponents to reveal the correct cards. 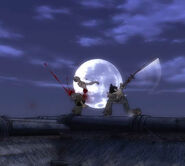 Slicing an opponent in the video game

Afro slicing an enemy in half
Community content is available under CC-BY-SA unless otherwise noted.
Advertisement