Afro Droid (アフロドロイド, Afuro Doroido) is a semi-sentient robot copy of Afro created by the Empty Seven Clan (specifically their personal scientist, Dharman). It was created from combat data siphoned from Afro's mind by Okiku, and is able to reproduce all of his learned techniques and abilities. It is physically superior to Afro, and its external appearance is identical. The Afro Droid is equipped with a variety of weapons including a cannon, missiles, forehead mounted laser, rocket propelled detachable arms and a very large laser cannon in his chest. He also possesses several visual filters including night and infrared. Afro eventually defeats Afro Droid in the third episode after the droid is impaled on its own sword following a sky-high, mid-air duel between the two, after which Afro destroys his memory chip and copied skills, thus stopping any more Afro Droids from being made. 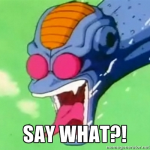